In total, the ACA includes more than $100 billion in mandatory spending from fiscal years 2010 through 2019, including $40 billion to fund the Children’s Health Insurance Program (CHIP) for two years (FY 2014–FY2015).(4)C.S. Redhead. October 10, 2014. Appropriations and Fund Transfers in the Patient Protection and Affordable Care Act (ACA) (Washington, D.C.: Congressional Research Service).,(5)The ACA reauthorized CHIP through 2019, but only provided funding through FY2015. Congress will need to act in order to extend the program’s budget, which expires on September 30, 2015. By the end of FY2014, the U.S. Department of Health and Human Services (HHS) had awarded nearly $21.4 billion in grants to agencies and organizations across all states and the District of Columbia. During this period, HHS administered 94 grant programs that were actively funded by the ACA. For a list of funding sources for select ACA programs by fiscal year, see Appendix 1.

As expected, states with large populations, like California and New York, received the most awarded funding, with approximately $2.8 billion and $1.5 billion, respectively (Figure 1). However, states that established a state-based health insurance marketplace received funding to support their efforts, elevating their total funding relative to states that selected a federally facilitated marketplace. For example, Colorado and Oregon (ranked 22nd and 27th in population, respectively) established state-based marketplaces and ranked in the top ten for total funding, boosted by market reform grants totaling $187 million and $316 million. In contrast, Pennsylvania and Georgia, which have federally facilitated marketplaces, have larger populations (ranked 6th and 8th, respectively) but finished outside the top ten in funding. Pennsylvania received $9.7 million in market reform funding, while Georgia received $3.8 million.

From a per capita perspective, the District of Columbia received the most funding, averaging $505.96 per person over this four-and-a-half-year period. The District is home to a number of national health care organizations and established a state-based insurance marketplace (see Appendix 2 for full details of state-level funding). 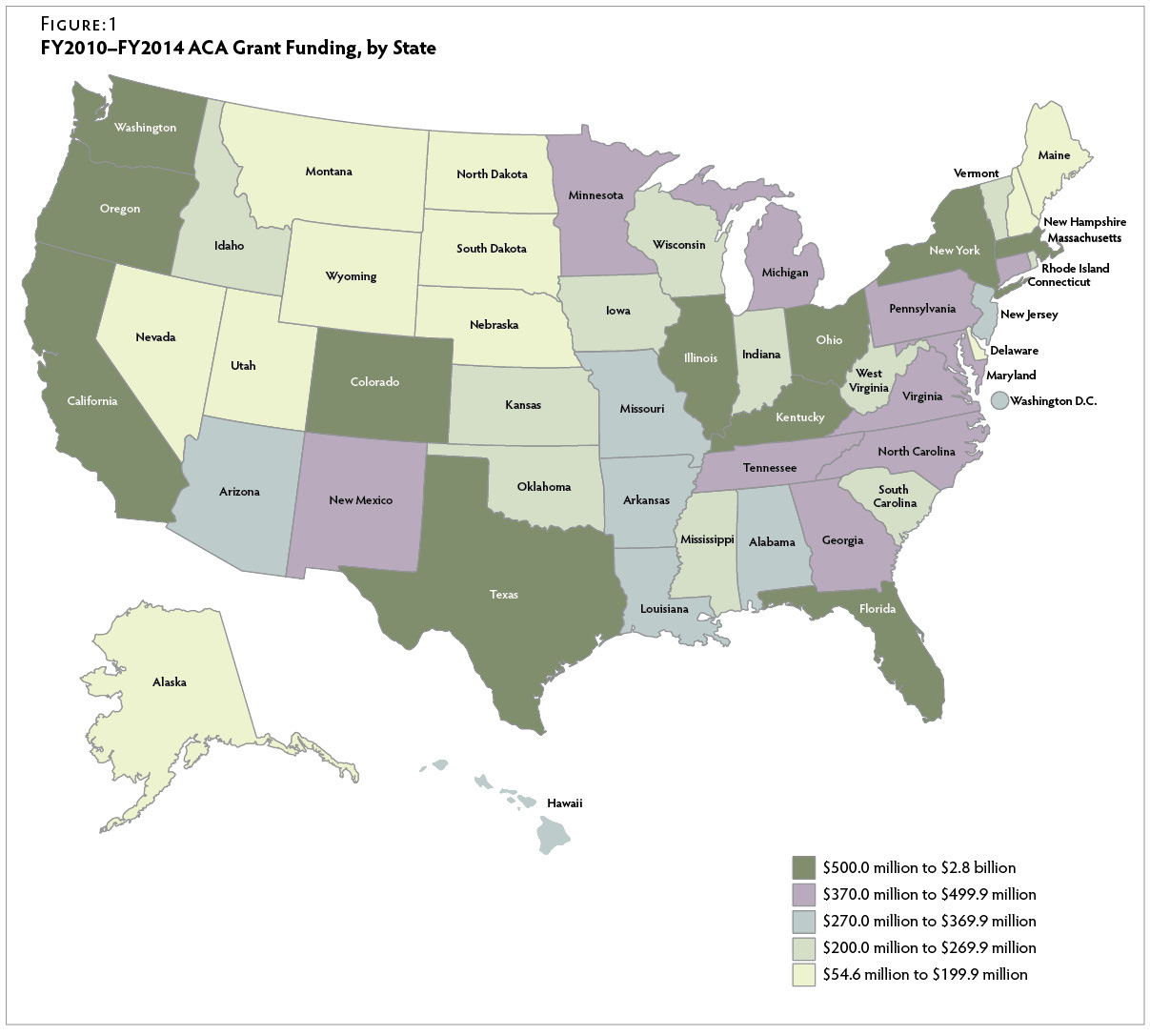 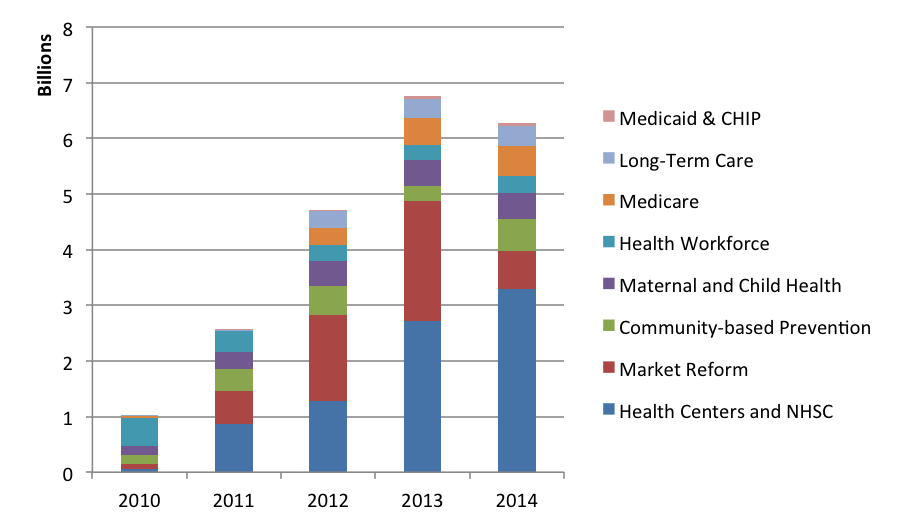 Funding in other priority areas has also shifted. In the short FY2010 funding period (March to September 2010), HHS awarded nearly half (48.9 percent) of ACA funding to health workforce development programs, mostly from the Prevention and Public Health Fund, in anticipation of increased primary care demand in 2014.

However, workforce spending decreased each subsequent year, hitting a low of $269 million (4.0 percent) in FY2013, only to increase slightly to $305.6 million (4.9 percent) in FY2014. Meanwhile, health center programs have been the most funded ACA programs, with $8.2 billion from FY2010 through FY2014. Other prominent categories of funding over this four-and-a-half-year period include community-based prevention programs and maternal and child health programs, each with approximately$1.9 billion in total funding.

In terms of organizations receiving ACA funding awards during this period, state agencies were the leading recipients, receiving $9.5 billion (44.4 percent) of total funding from FY2010 to FY2014 (Figure 3). These funds were used to support a variety of activities, including health insurance marketplace implementation ($4.5 billion), Early Childhood Home Visitation programs ($1.2 billion), and long-term care demonstrations ($982.4 million). Health and community-based organizations received the second largest share of awards, with $8.8 billion (41.3 percent) of total funding. In FY2014, recipients in this category were actually awarded the largest share of funding at $3.3 billion (52.4 percent), receiving more than state agencies during the fiscal year. This category includes many community health centers that were awarded funding to support service expansion and facility improvements, allowing them to serve a larger number of patients. Colleges and universities were prominent recipients in FY2010, with 31.7 percent of awards, but their share fell to 6.4 percent in FY2014, as funding priorities shifted away from workforce training. 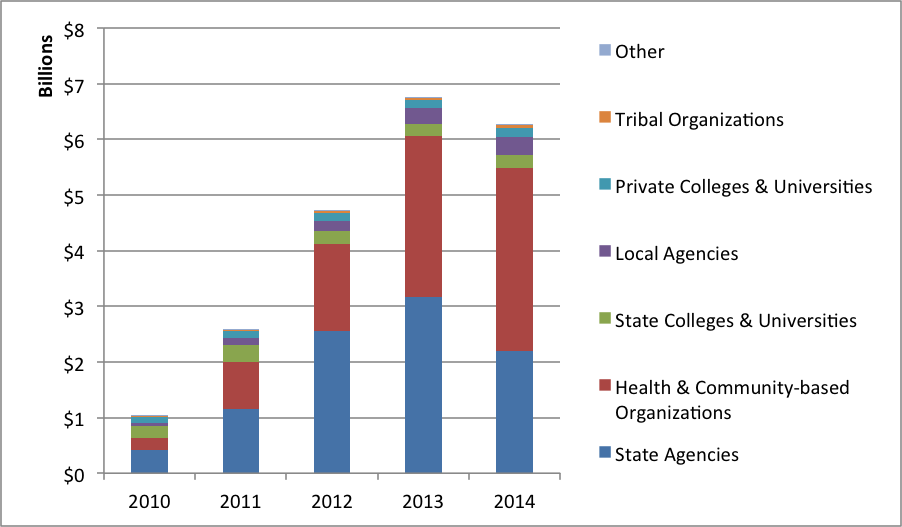 The ACA in Michigan

In Michigan, several organizations have been active in applying for and receiving grant funding to implement insurance reforms, improve health care access, and invest in public health infrastructure.

Since the ACA became law in March 2010 through the most recent fiscal year ending in September 2014, Michigan has been awarded a total of $489.4 million in funding. The largest category of funding was for health centers ($210.9 million), with funding for maternal and child health programs a distant second ($53.9 million).

The State of Michigan, including the Department of Community Health (MDCH), received the most funding over this period ($177.2 million); more than eight times the amount received by Cherry Health (formerly Cherry Street Health Services), the second highest recipient (Figure 4).

Similar to national trends, health center programs were the largest focus of funding in Michigan in FY2014, with $86.7 million (47.1 percent) of funding (Figure 5). However, funding for market reform programs (0.9 percent) was significantly below the national rate (10.8 percent) of funding for these programs. Much of this disparity can be attributed to the state’s choice to forgo funding to implement its own state-based health insurance marketplace and instead utilize the federally facilitated marketplace. Programs related to community-based prevention were the second largest area of funding, with $28.4 million (15.4 percent), increasing significantly from $4.2 million (2.8 percent) in FY2013. The State of Michigan received the majority of community-based prevention funding, with ten grants totaling $25.7 million. 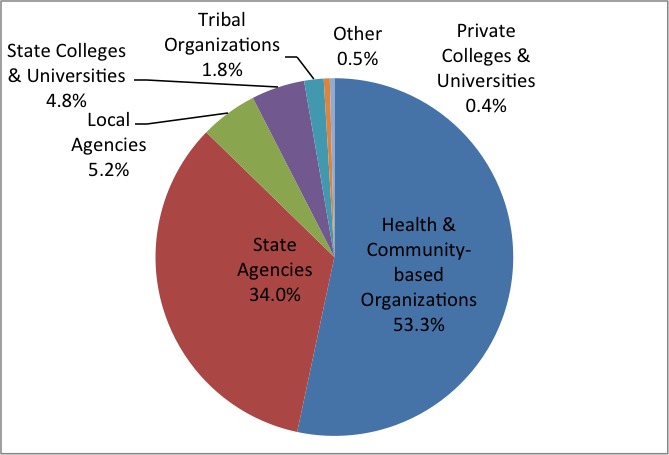 Michigan award highlights in FY2014 include:

Appendix 1: Funding of Select ACA Programs, by Year (millions of dollars)(10)Appropriation levels do not reflect spending reductions due to sequestration from the Budget Control Act of 2011. Program appropriation figures from the Congressional Research Service. 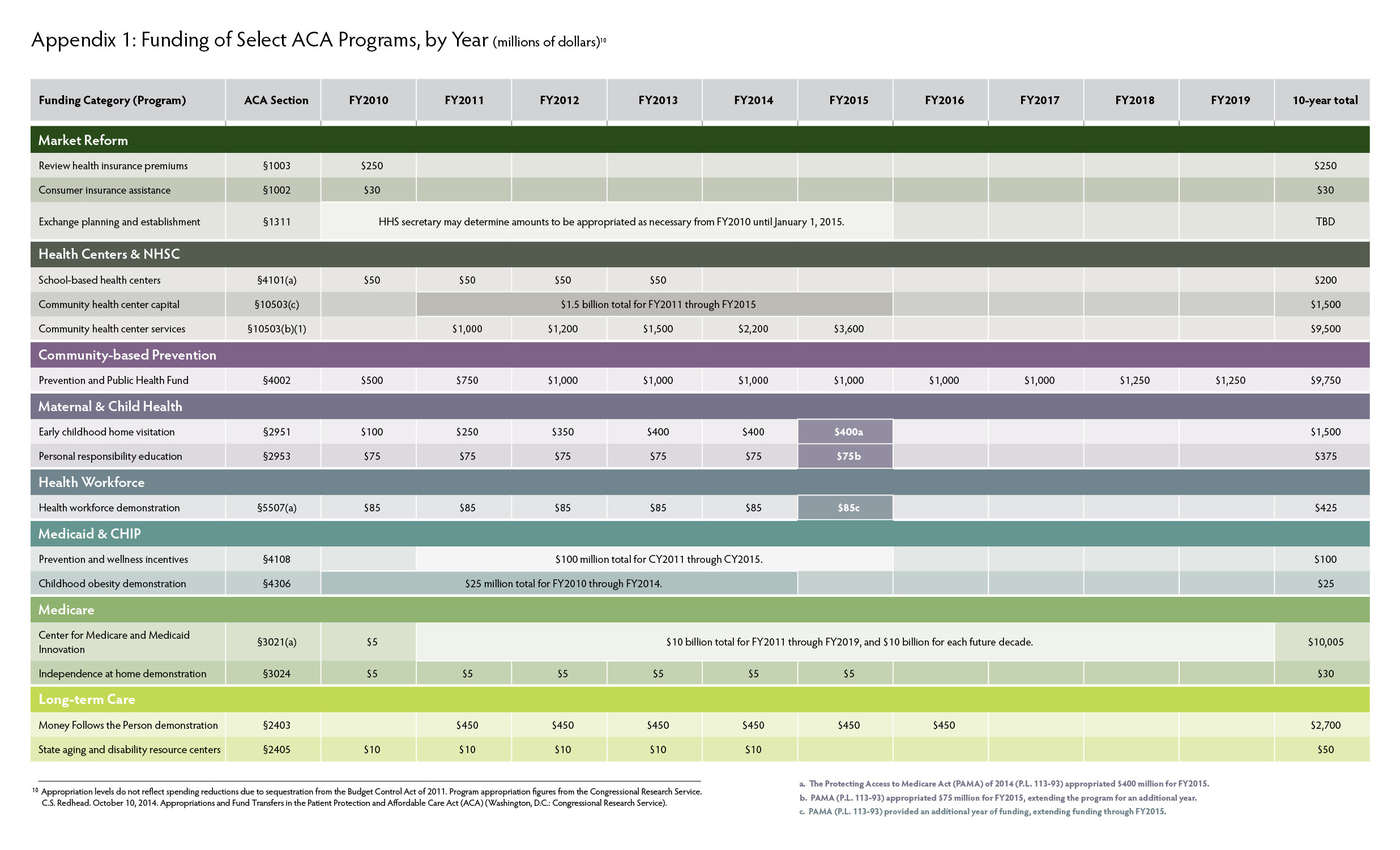 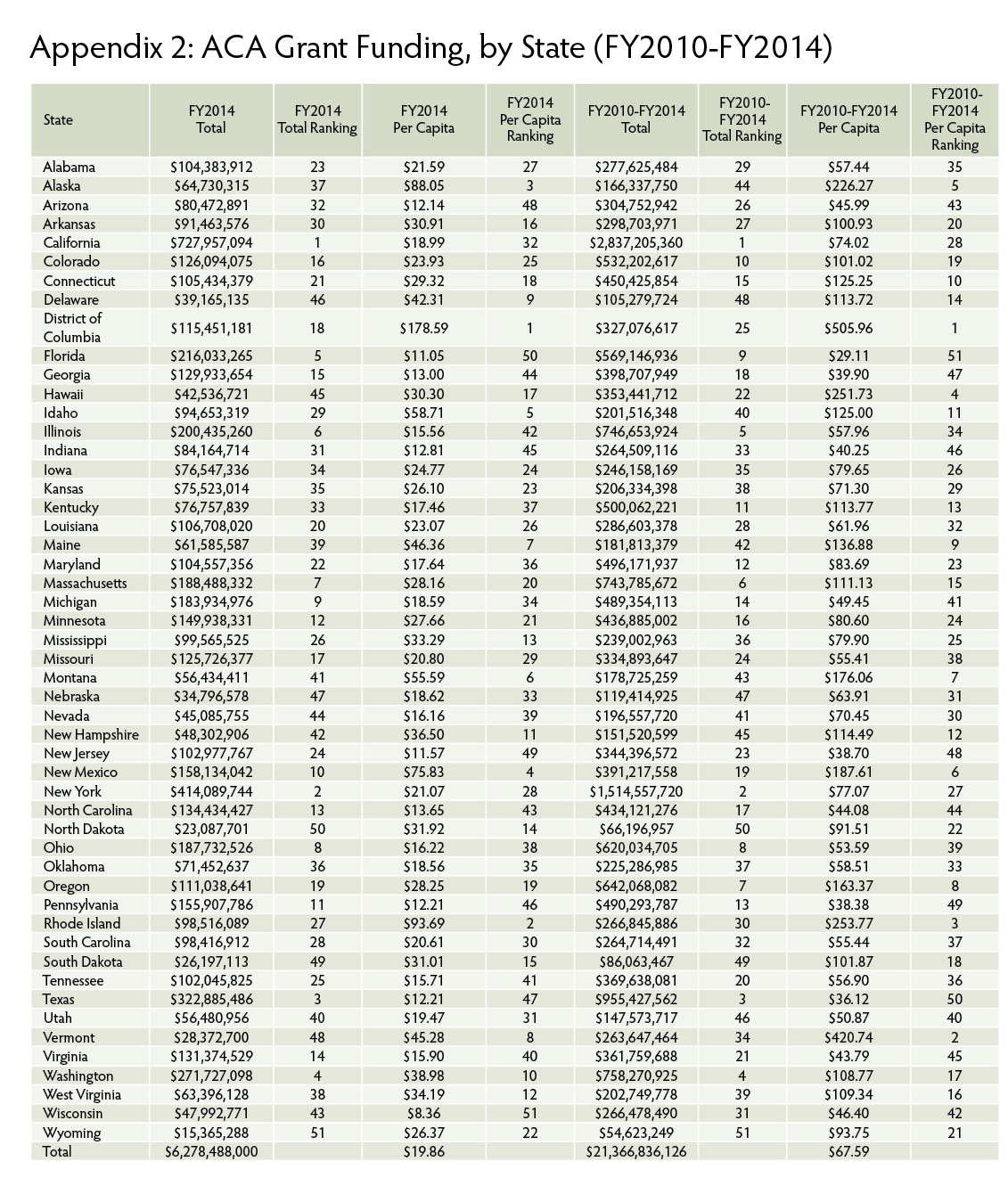