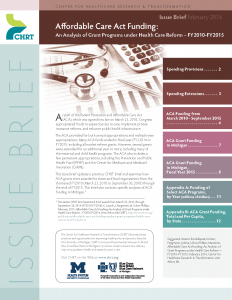 As part of the Patient Protection and Affordable Care Act (ACA), which was signed into law on March 23, 2010, Congress
appropriated funds to expand access to care, implement private insurance reforms, and enhance public health infrastructure.

The ACA provided for both annual appropriations and multiple-year appropriations. Many ACA funds ended in fiscal year (FY) 2014 or FY2015, including all market reform grants. However, several grants were extended for an additional year or more, including many of the maternal and child health programs. The ACA also includes a few permanent appropriations, including the Prevention and Public Health Fund (PPHF) and the Center for Medicare and Medicaid
Innovation (CMMI).

Many ACA initiatives were funded through mandatory spending and do not require further Congressional approval. In total, the ACA included more than $100 billion in mandatory spending over a ten-year period (FY2010-FY2019). This included $65.2 billion to the Children’s Health Insurance Program (CHIP) between FY2014 and FY2017, and $10 billion to extend other funding programs, as required by subsequent legislation.(2)C.S. Redhead. March 6, 2015. Appropriations and Fund Transfers in the Affordable Care Act (ACA) (Washington, D.C.: Congressional Research Service)., (3)The Medicare Access and CHIP Reauthorization Act (MACRA) of 2015 extended funding for CHIP through FY2016 and FY2017, totaling $25 billion over the two years. This is not included in the $100 billion estimated by the Congressional Research Service.

The Medicare Access and CHIP Reauthorization Act of 2015 (MACRA), signed into law in April 2015, extended CHIP, the Community Health Center Fund (CHCF) that funds health centers and the National Health Service Corps (NHSC), several maternal and child health programs, and health workforce programs. Funding in these categories was set to expire at the end of FY2015 and was extended through either FY2016 or FY2017. CHIP programs vary from state to state and can operate as an expansion of Medicaid, as a stand-alone program, or a combination of both. Michigan operates as a combination. In January 2016, the CHIP-funded MIChild program became a Medicaid expansion program.(7)Michigan Department of Health and Human Services, Answers to Frequently Asked Questions about MIChild Converting to Medicaid(accessed 12/29/15).

See Appendix A for a list of funding sources for select ACA programs by fiscal year. Select programs include those with permanent funding or funding extensions, and at least one program was included per funding category.

ACA Funding From March 2010 through September 2015

By the end of FY2015, the U.S. Department of Health and Human Services (HHS) had awarded $28.5 billion in grants to agencies and organizations across the United States, including the District of Columbia. The ACA funded a total of 101 grant programs between March 2010 and the end of FY2015.

States with large populations received the most funding, including California and New York, with approximately $3.6 billion and $2.0 billion, respectively. Figure 1 However, similar to CHRT’s analysis of FY2010-FY2014 ACA funding, states that received funding to plan and establish state-based health insurance marketplaces had greater overall funding compared to states that chose federally facilitated marketplaces. For example, Kentucky and Oregon (ranked 26th and 27th in population, respectively) established state-based marketplaces and ranked in the top ten for total funding, with market reform grants totalling $292.1 million and $314.7 million, respectively. In contrast, Georgia and North Carolina, which have federally facilitated marketplaces, have larger populations (ranked 8th and 9th, respectively), but did not rank in the top ten in total funding. Georgia received $3.5 million in total funding and North Carolina received $23.9 million. 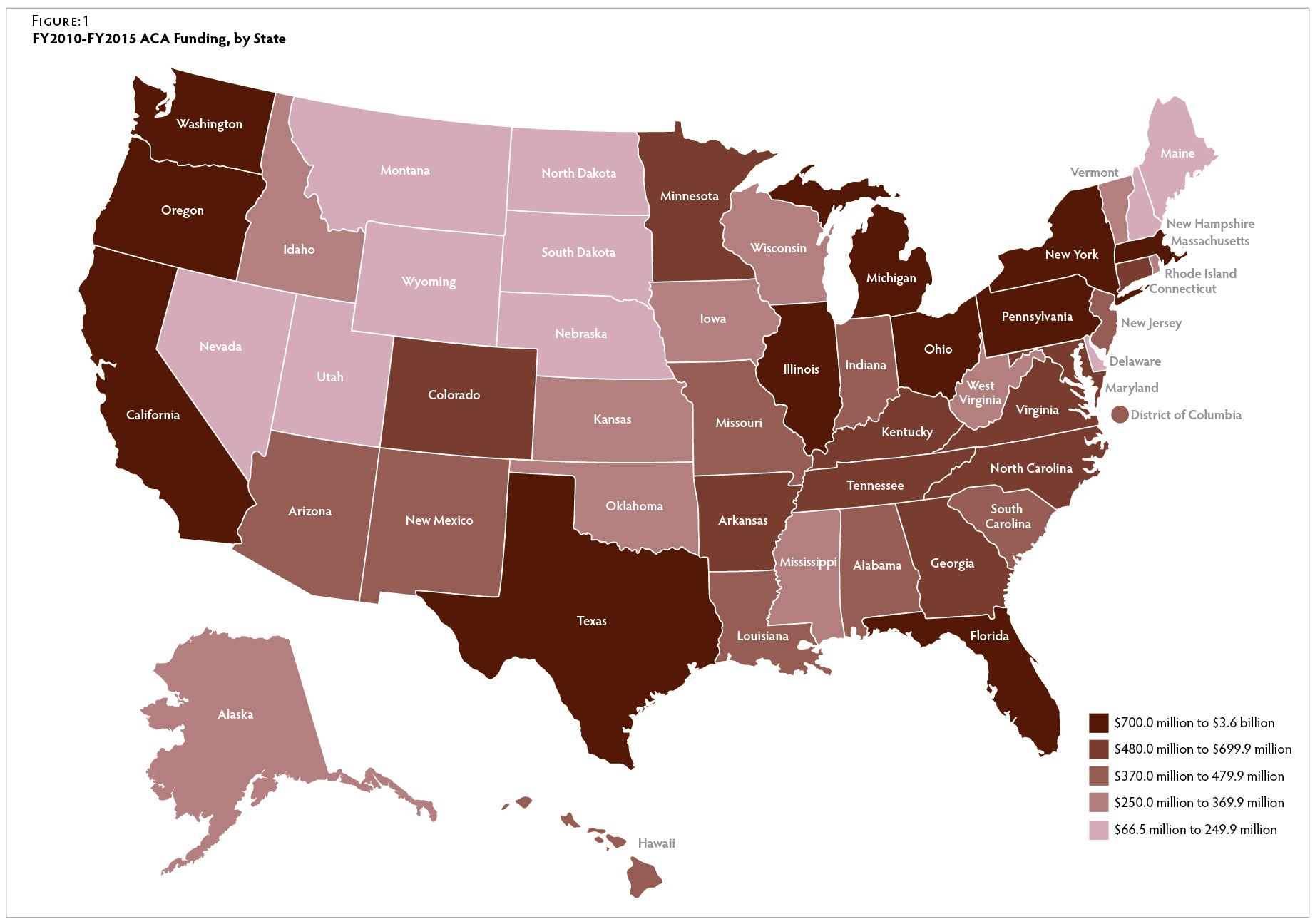 The total amount of funding awarded under the ACA has increased every year except from FY2013 to FY2014. Funding
increased by 6.0 percent between FY2013 and FY2015, and 14.2 percent between FY2014 and FY2015. Figure 2 The increase from FY2014 ($6.28 billion) to FY2015 ($7.17 billion) was largely due to an increase in funding for new and expanded services and capital improvements for health centers. Funding in this area increased from $3.3 billion (52.4 percent) of total ACA grant funding in FY2014, to $4.3 billion (60.5 percent) in FY2015. Most of the FY2015 funding in this area supported the Behavioral Health Integration Service Expansion, Health Center Controlled Networks, Health Center Expanded Services, and New Access Points programs ($4.2 billion combined). 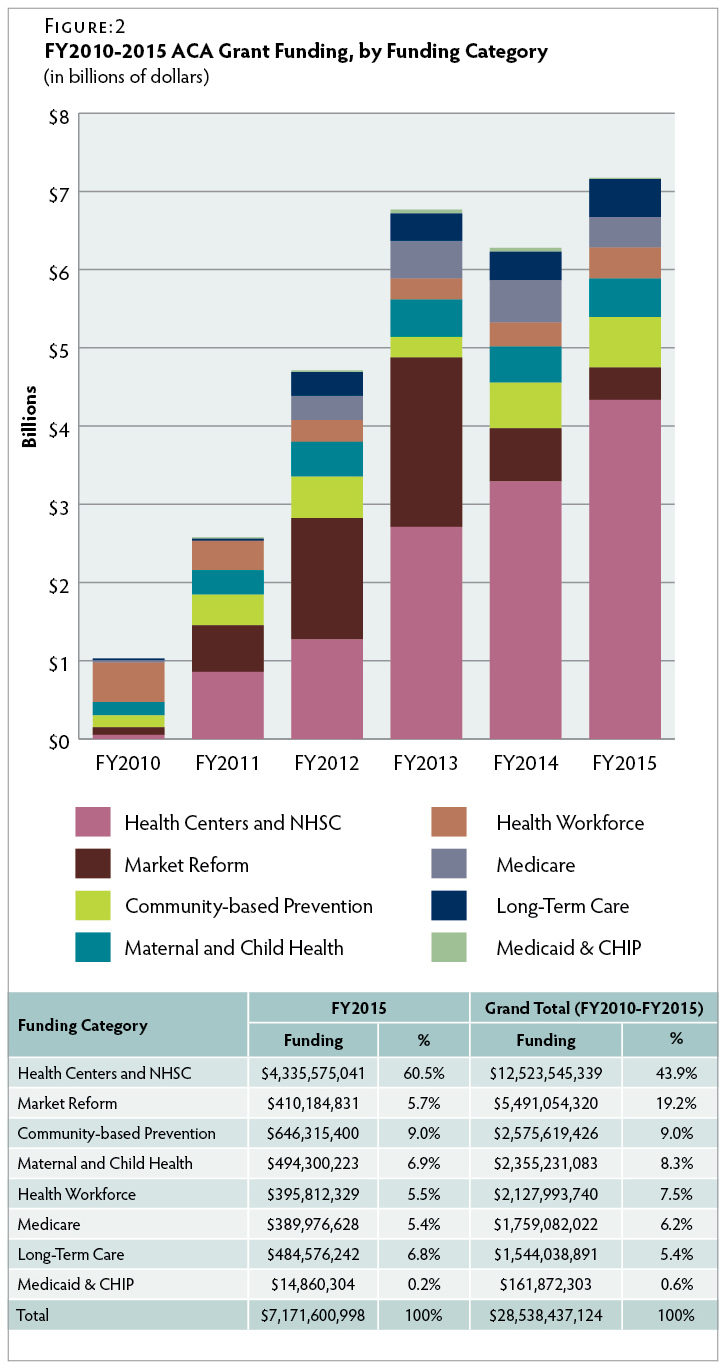 Health and community-based organizations were the leading recipients of ACA funding awards during the FY2010-FY2015 period, with $13.1 billion (46.0 percent) of total awarded funding. Figure 3 The majority of these funds, $10.7 billion, supported new and expanded services and capital development for health centers. The second largest share of funding was awarded to state agencies, with $11.5 billion (40.4 percent) of total funding. 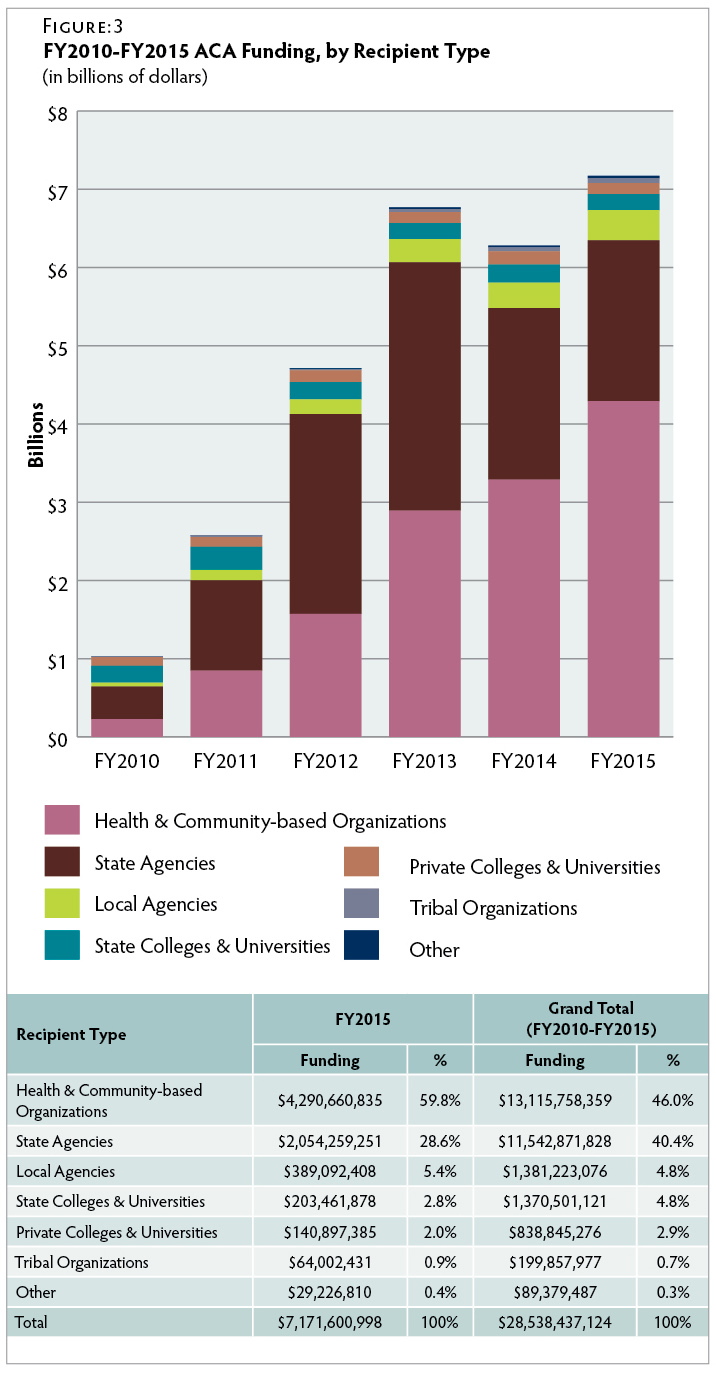 In Michigan, several organizations have been active in applying for and receiving grant funding to implement insurance reforms, improve health care access, and invest in public health infrastructure. Since the ACA became law in March 2010 through the end of the most recent fiscal year in September 2015, Michigan was awarded $708.9 million in funding. The largest category of funding was for health centers ($329.1 million) and the second largest was for community-based prevention ($81.2 million). 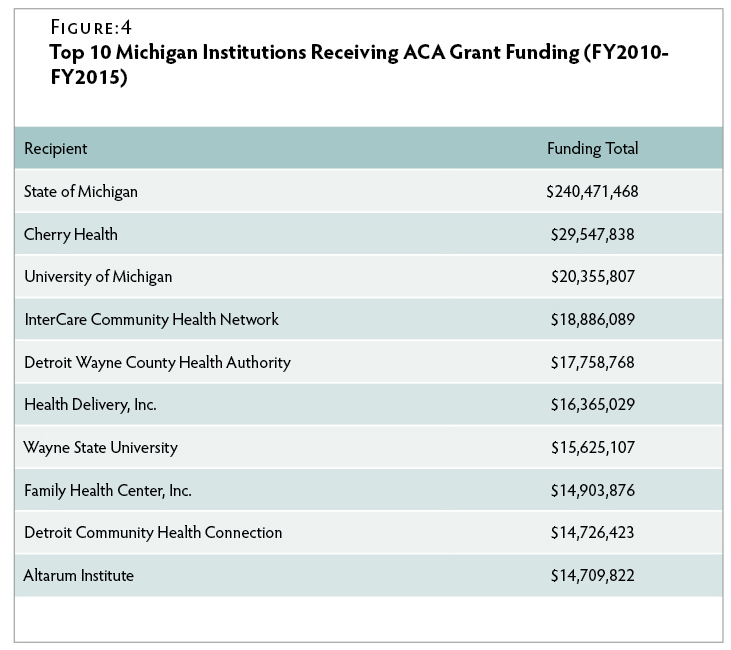 Similar to national trends, Michigan’s largest funded grant category was health center programs, receiving over half of total funding in FY2015. Funding for ACA Medicare programs represented a larger percentage of total awarded funding in Michigan, at 15.1 percent, compared to the average 5.4 percent for Medicare program funding across other states. Figure 5 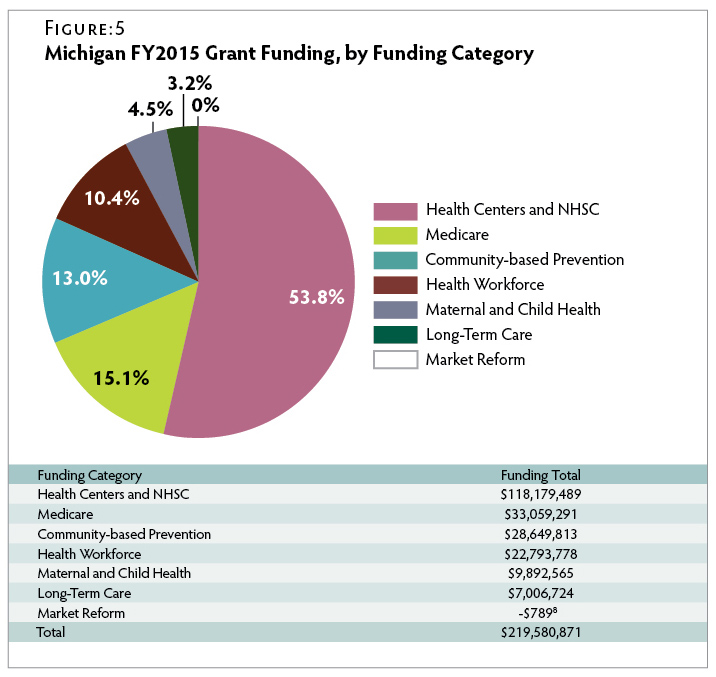 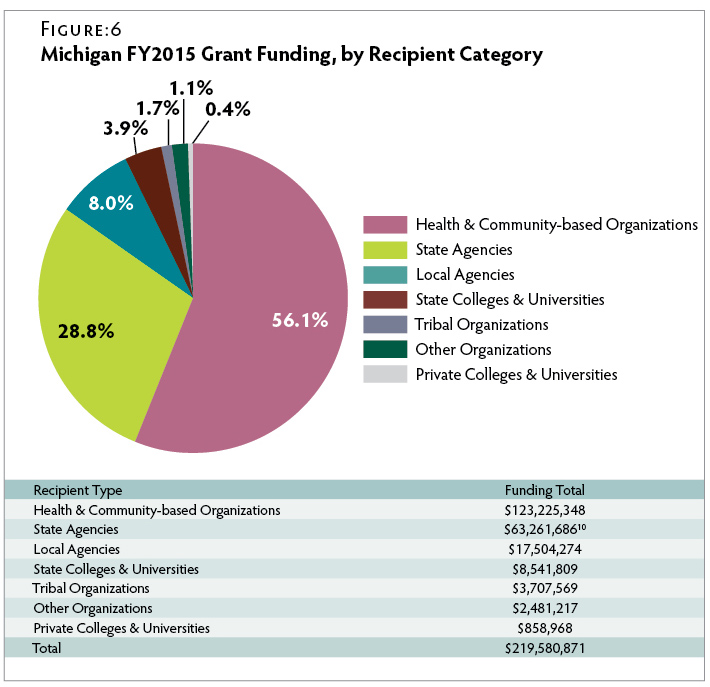 Appendix B: ACA Grant Funding, Total and Per Capita, by State 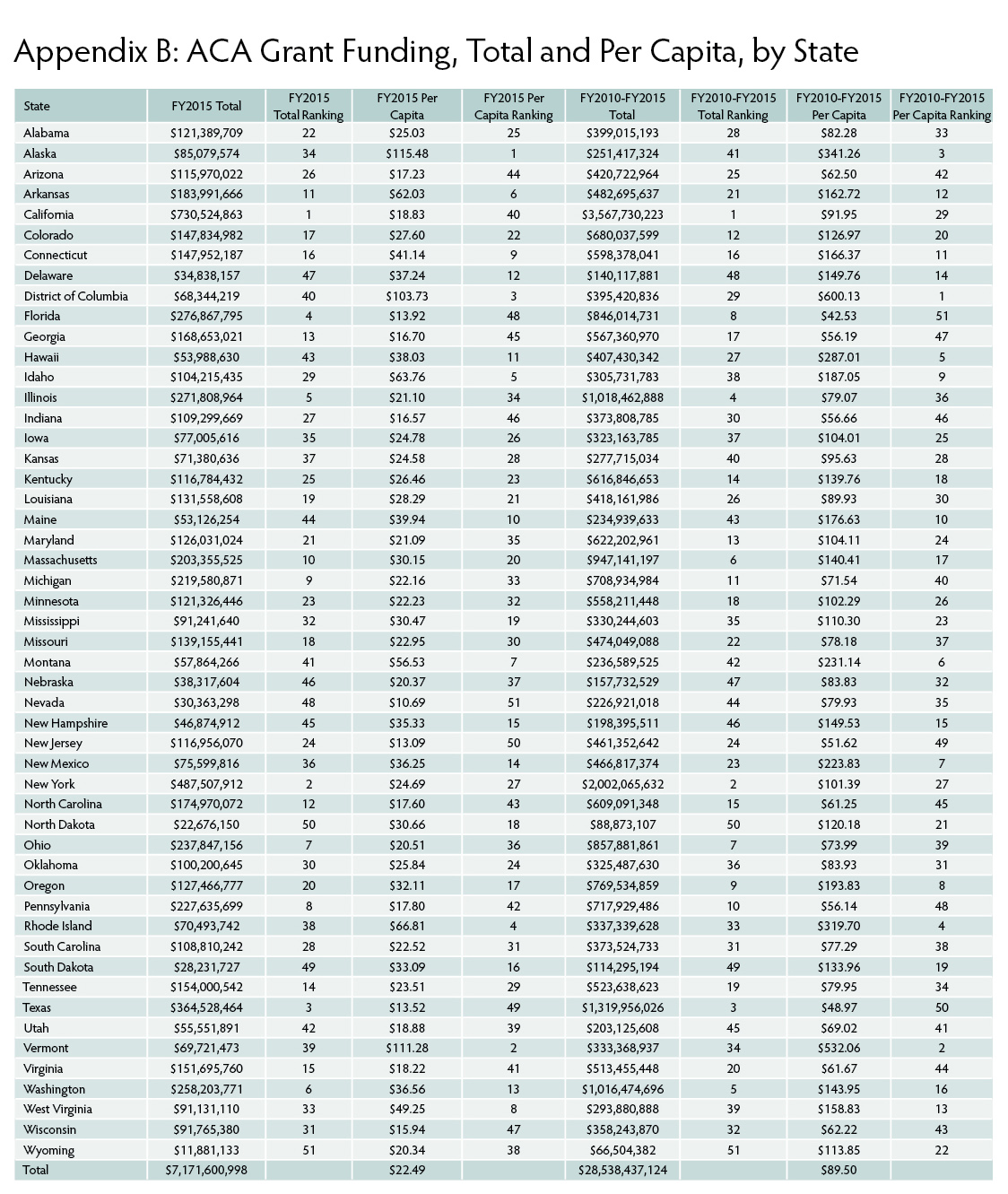