Since the launch of health insurance coverage expansion in 2014 under the Affordable Care Act (ACA), Michigan and other states have experienced large decreases in the number of adults who lack health insurance, delay necessary care, and have trouble paying their medical bills.(1) Austic, E. Lawton, M. Slowey, M. Riba, and M. Udow-Phillips, Changes in Health Care Cost Barriers under the Affordable Care Act in Michigan (Ann Arbor, MI: Center for Healthcare Research and Transformation, March 2017). However, these effects have not been even nationwide, as 21 states had not adopted the ACA’s optional Medicaid expansion by the end of 2015.(2) Dussault, M. Pinkovskiy, and B. Zafar, “Is Health Insurance Good for Your Financial Health?” Liberty Street Economics, June 6, 2016: http://libertystreeteconomics.newyorkfed.org/2016/06/is-health-insurance-good-for-your-financial-health.html (accessed 3/10/17). Hospitals are particularly affected by health insurance coverage expansions because many hospitals have traditionally provided free and/or reduced price services to low-income and uninsured patients as part of their social mission and community benefit requirements. Prior to the ACA coverage expansion, health care providers, including hospitals, provided approximately $1,000 of uncompensated care per uninsured individual.(3)T. A. Coughlin et al.,  “An Estimated $84.9 Billion in Uncompensated Care Was Provided in 2013; ACA Payment Cuts Could Challenge Providers,” Health Affairs, May 2014, 33(5): 807–14: http://content.healthaffairs.org/content/33/5/807.full (accessed 3/10/17).(accessed 3/10/17). This report examines the effect of health care expansion on hospital uncompensated care with a comparison of Midwest states.

Hospitals have two forms of uncompensated care: charity care and bad debt.(4) Broader definitions of uncompensated care may include underpayments from Medicare and Medicaid, but underpayments were not included in this analysis.  Charity care is delivered to indigent patients without the expectation of receiving payment, and bad debt occurs when a hospital bills for but is unable to collect the entire amount due from a patient.(5) Hospitals have different procedures and qualifications for how patients can apply for charity care assistance, which limits the comparison of charity care and bad debt measures across hospitals.This report updates an earlier CHRT report(6) Fangmeier and M. Udow-Phillips, “Hospital Uncompensated Care, 2014,” Cover Michigan 2016 (Ann Arbor, MI: Center for Healthcare Research and Transformation, 2016). to measure the effect of the ACA’s coverage expansion, particularly the optional Medicaid expansion, on hospital uncompensated care costs and other financial outcomes. In addition, this report compares trends in uncompensated care across eight selected Midwestern states.

Several studies have examined the relationship between health insurance coverage expansions and the provision of uncompensated care by hospitals. As part of the Oregon Health Insurance Experiment—a randomized study of the effects of Medicaid coverage on adults—researchers found that a large share of the value of Medicaid spending for new enrollees went to external parties, including health care providers, who were previously providing care without payment.(7)A. Finkelstein, N. Hendren, and E.  Luttmer, “The Value of Medicaid: Interpreting Results from the Oregon Health Insurance Experiment,” NBER Working  Paper 21308 (Cambridge, MA: National Bureau of Economic Research, June 2015): http://www.nber.org/papers/w21308 (accessed 3/10/17).

Recent studies have documented the decline in hospital uncompensated care after the ACA’s coverage expansion began in 2014. One study found that state Medicaid expansion was associated with a $2.8 million decrease in uncompensated care per hospital and improved profit margins.(9)F. Blavin, “Association Between the 2014 Medicaid Expansion and US Hospital Finances,” Journal of the American Medical Association, Oct. 11, 2016, 316(14): 1475–83.2016: http://jamanetwork.com/journals/jama/fullarticle/2565750 (accessed 3/10/17). Another study found larger uncompensated care reductions for hospitals in Medicaid expansion states that had greater pre-ACA uncompensated care burdens or were located in regions with greater numbers of people who became newly eligible for Medicaid.(10)D. Dranove, C. Garthwaite, and C. Ody, “Uncompensated Care Decreased at Hospitals in Medicaid Expansion States But Not at Hospitals in Nonexpansion States,” Health Affairs, Aug. 2016, 35(8): 1471–9: http://content.healthaffairs.org/content/35/8/1471.abstract (accessed 3/10/17).

Many of these trends continued into 2015. The American Hospital Association (AHA) found that uncompensated care costs for hospitals nationwide decreased from $42.8 billion in 2014 to $35.7 billion in 2015. The ratio of uncompensated care to total expenses also fell substantially and is now the lowest it has been since the AHA began reporting in 1990.(11)American Hospital Association, Uncompensated Hospital Care Cost Fact Sheet, December 2016:  http://www.aha.org/content/16/uncompensatedcarefactsheet.pdf (accessed 3/10/2017).

With the reduction in uninsured patients, some hospital systems expanded their qualification rules for charity care to provide assistance to patients with high deductibles and other out-of-pocket costs. In 2016, Ascension Health began waiving unpaid bills for patients with an income below 250 percent of the federal poverty level (FPL) and experienced a 12 percent increase in charity care costs in 2016.(12)Ascension. Management’s Discussion and Analysis of Financial Condition and Results of Operations for Ascension, n.d.:  http://ascension.org/~/media/files/ascension/about/community-investor-relations/2017/management-discussion-q2-2017.pdf?la=en (accessed 3/10/2017).

To better understand the connection between coverage expansion and hospital uncompensated care, CHRT compared eight Midwestern states with varying market and policy characteristics. For example, hospitals in Michigan, Ohio, and Illinois were more likely to have a teaching program for the graduate medical education of residents (see Figure 2). Hospitals in Iowa, Minnesota, and Wisconsin were more likely to have a critical access designation as a rural provider and have fewer hospital beds. Missouri and Indiana hospitals were more likely to be part of investor-owned, for-profit companies compared to the other Midwestern states.

States across the Midwest have taken different approaches to setting Medicaid eligibility for low-income adults. Minnesota took advantage of the ACA’s option for states to expand coverage prior to 2014 and allowed adults with an income less than 75 percent of the FPL to enroll in 2011.(13)Sommers, G. Kenney and A. Epstein, “New Evidence On The Affordable Care Act: Coverage Impacts Of Early Medicaid Expansions”, Health Affairs, Jan. 2014, 33(1):78–87: http://content.healthaffairs.org/content/33/1/78.full (accessed 3/10/17).

Illinois, Iowa, Minnesota, and Ohio then adopted the full Medicaid expansion on January 1, 2014. Indiana and Michigan expanded enrollment on April 1, 2014, and February 1, 2015, respectively (see Figure 3). Illinois, Michigan, and Ohio all experienced a decrease in their uninsured population of over 40 percent from 2013 to 2015.

Neither Missouri nor Wisconsin has expanded Medicaid. However, Wisconsin is the only non-expansion state in the country that does not have a coverage gap for financial assistance.(14)Adults with incomes below 100 percent FPL in all other non-expansion states fall into a coverage gap because they are ineligible for Medicaid coverage, and tax credits to purchase coverage on the health insurance marketplace are only available to those with incomes above 100 percent FPL.Wisconsin’s Medicaid program covers adults with income up to 100 percent FPL, and adults whose income is above the poverty line are eligible for financial assistance through the health insurance marketplace. In contrast, childless non-disabled adults in Missouri are not eligible for Medicaid, regardless of income level. 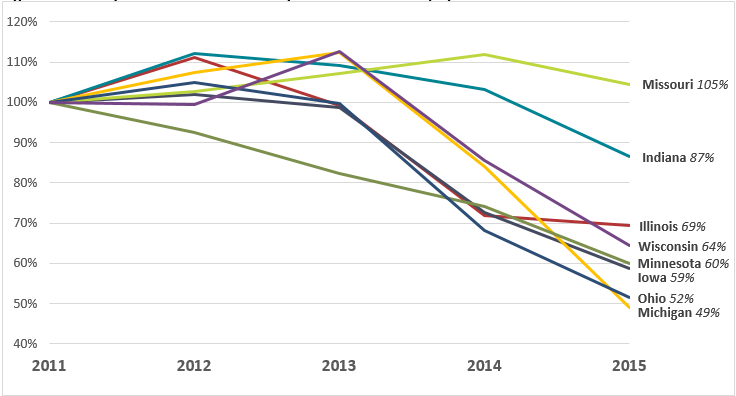 Medicaid expansion states have continued to experience large declines in hospital uncompensated care costs since 2014. As debate among state and federal policymakers about the future of the Affordable Care Act continues, it will be important to examine the connection between health insurance coverage expansions and financial outcomes for health care providers. Not all hospitals experienced the same effects of coverage expansion on uncompensated care, and it is not clear how hospitals would respond to policy changes that reduce the coverage gains under the ACA or the value of coverage to those who became newly insured.

We extracted hospital data on uncompensated care and other facility characteristics from publicly available cost reports submitted by hospitals to the Centers for Medicare and Medicaid Services (CMS) via the Healthcare Cost Report Information System (HCRIS). Data include reports collected by December 31, 2016, which were released on January 19, 2017. For this analysis, we restricted the set of hospitals to short-term acute and critical access hospitals that submitted complete reports for each year from 2011 through 2014. This eliminated rehabilitation, long-term, psychiatric, children’s, and other specialty hospitals that have high nonresponse rates or are not largely affected the ACA’s Medicaid expansion. The resulting data set includes 3,474 hospitals nationwide.

Cost reports submitted to hospitals are based on individual hospitals’ fiscal years, which have varying beginning and end dates. To generate comparable time-series measures, we converted hospital fiscal year measures to calendar year estimates by combining the portion of each fiscal year that fell within a given calendar year. Uncompensated care amounts were converted from charges to costs using hospital-specific cost-to-charge ratios calculated in the cost reports, and all financial measures were adjusted for inflation to 2014 dollars. Facilities that reported outlier uncompensated care amounts compared to their historic trend were dropped from the study.

Hospitals were identified as for-profit, nonprofit, or government-owned based on control status data from the 2013 American Hospital Association annual survey.(21)American Hospital Association, Annual Survey Database: http://www.aha.org/research/rc/stat-studies/data-and-directories.shtml (accessed 3/17/16). Metropolitan status was determined based on the U.S. Department of Agriculture’s rural-urban continuum codes for 2013,(22)U.S. Department of Agriculture,Economic Research Service, Rural-Urban Continuum Codes: http://www.ers.usda.gov/data-products/rural-urban-continuum-codes.aspx (accessed 3/17/16). and hospitals were identified as teaching institutions if they indicated in their cost reports that they train residents as part of an approved graduate medical education program. 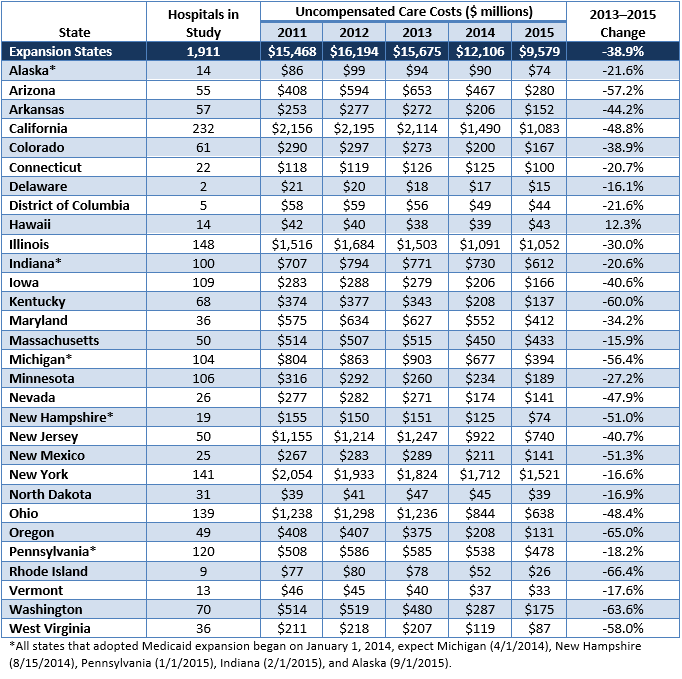 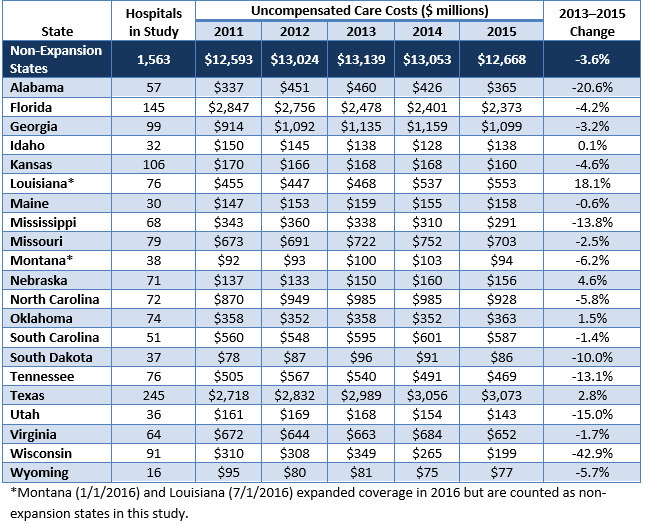