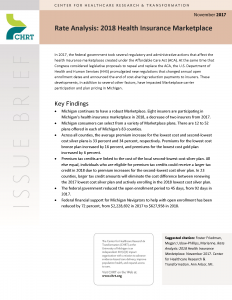 In 2017, the federal government took several regulatory and administrative actions that affect the health insurance marketplaces created under the Affordable Care Act (ACA). At the same time that Congress considered legislative proposals to repeal and replace the ACA, the U.S. Department of Health and Human Services (HHS) promulgated new regulations that changed annual open enrollment dates and announced the end of cost-sharing reduction payments to insurers. These developments, in addition to several other factors, have impacted Marketplace carrier participation and plan pricing in Michigan.

The changing dynamics of the health insurance marketplace are important for 2018 enrollees to understand. Under current federal policy, enrollees who do not actively apply and enroll in 2018 coverage are auto-renewed into their 2017 plan, if it continues to be offered. Individuals who were enrolled in a 2017 plan offered by an issuer that is no longer participating in the Marketplace will be notified that their plan is no longer available prior to the end of the open enrollment period. If these individuals do not actively choose another plan, they will automatically be enrolled into a different 2018 plan. Auto-enrollment for the 2018 plan year will occur on December 16, 2017. In addition, changes to benchmark plans directly affect premium tax credit amounts, so many enrollees will need to balance potentially higher costs for renewing their 2017 plan with other important considerations, such as the breadth of available provider networks.

In 2017, developments at the federal level generated substantial uncertainty over the future of the Affordable Care Act (ACA) and the functioning of the health insurance marketplaces. While Congress debated numerous unsuccessful proposals to repeal and replace the ACA, the U.S. Department of Health and Human Services (HHS) took several administrative actions that impact the Marketplace.

Because premium tax credits are based on the price of the second-lowest cost silver plan offered in an area, an increase in silver plan prices translates to an increase in the amount of tax credits eligible individuals receive. In 2017, 81 percent of Michigan residents who enrolled in Marketplace coverage received premium tax credits.6 As a result of this CSR loading strategy, DIFS approved an average statewide premium increase of 26.8 percent across individual market plans for 2018. If CSR payments had not been terminated, the average statewide premium increase across all individual market plans would have been approximately 17 percent.

Changes in the Number of Participating Carriers

Eight insurers offer coverage in the Michigan Marketplace in 2018, a decrease of two insurers from 2017. In early 2017, Humana announced it would no longer offer plans on the individual market nationwide.8 Health Alliance Plan (HAP) filed proposed rates for 2018 plans, but later announced that it would withdraw from the Marketplace in 2018. HAP cited ongoing uncertainty from the federal government over cost-sharing reduction payments, individual mandate enforcement, and premium stabilization programs as factors preventing them from being able to offer Marketplace plans in 2018.9 HAP continues to offer off-marketplace individual plans in 2018, along with Alliance Health and Life which had previously exited the Marketplace before the 2017 open enrollment period.[/accordion-content]

Changes in the Number of Plan Offerings 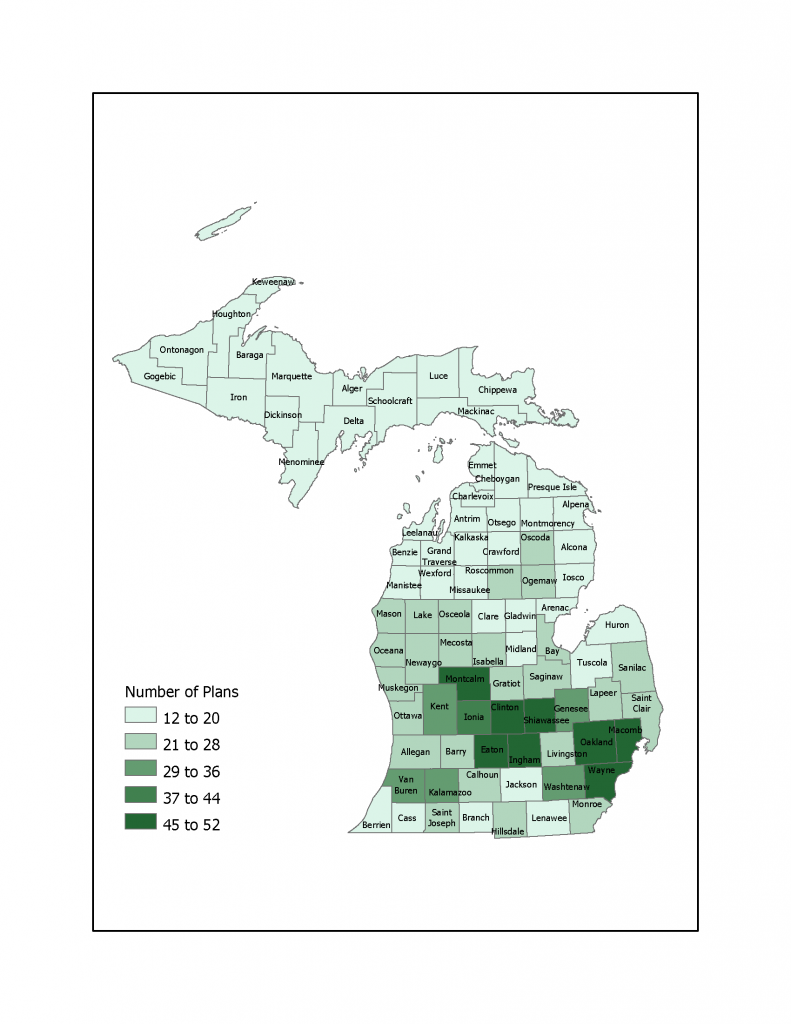 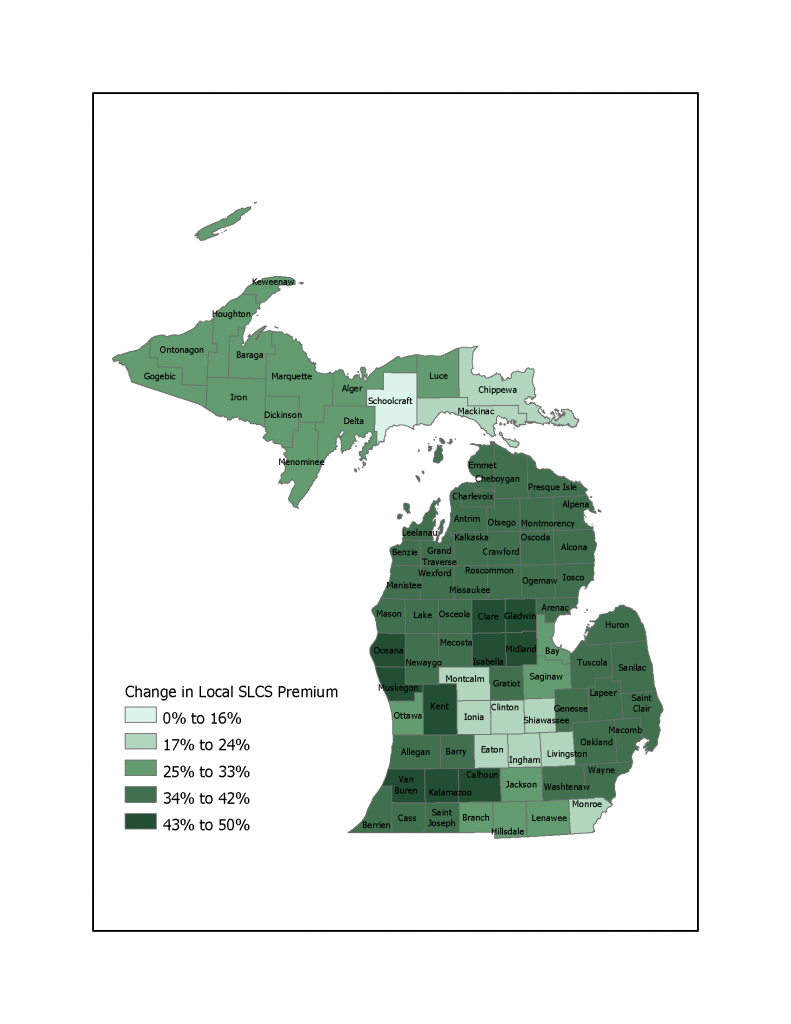 From November 1, 2017 until December 15, 2017, many consumers currently enrolled in coverage through Michigan’s health insurance marketplace can renew their 2017 plan to maintain uninterrupted coverage for 2018. On December 16, 2017, returning consumers who have not yet actively selected 2018 coverage will be auto-enrolled in their 2017 plan (or a plan offered by a different carrier, in the case of Humana and HAP enrollees). Certain enrollees may face higher premium costs if they stay with their current plan, due to several factors that affect premiums and premium tax credit amounts, and will need to balance these premium increases with other considerations, such as determining the provider network that best suits them.

Shifts in marketplace plan offerings from one year to the next can lead to local benchmark plan changes, and certain plans may be discontinued and not available for renewal. This affects 2018 enrollees, since the premium tax credit amount that enrollees may receive is based on two key factors: the local benchmark premium cost and the enrollee’s household income.12 The amount of the tax credit can be affected by the factors listed below:

Since local benchmark plans are changing in most Michigan counties for 2018, premium tax credit amounts may also change for many enrollees, even if their income and household size remain constant. Figures 4 and 5 provide examples of the effective premium rate increases (after tax credits are applied) enrollees may face if they renew their 2017 plan, instead of actively enrolling in a new plan. We model the effects for enrollees who selected their local lowest cost silver (LCS) plan in 2017. According to Avalere Health, LCS plans have been among the most popular plans in the federally-facilitated marketplace.13 The local 2017 LCS plan was discontinued in 44 counties in Michigan for 2018, while the local 2017 LCS plan remains available for renewal in 39 counties. This is similar to 2017, when the local 2016 LCS plan was available for renewal in 34 counties. 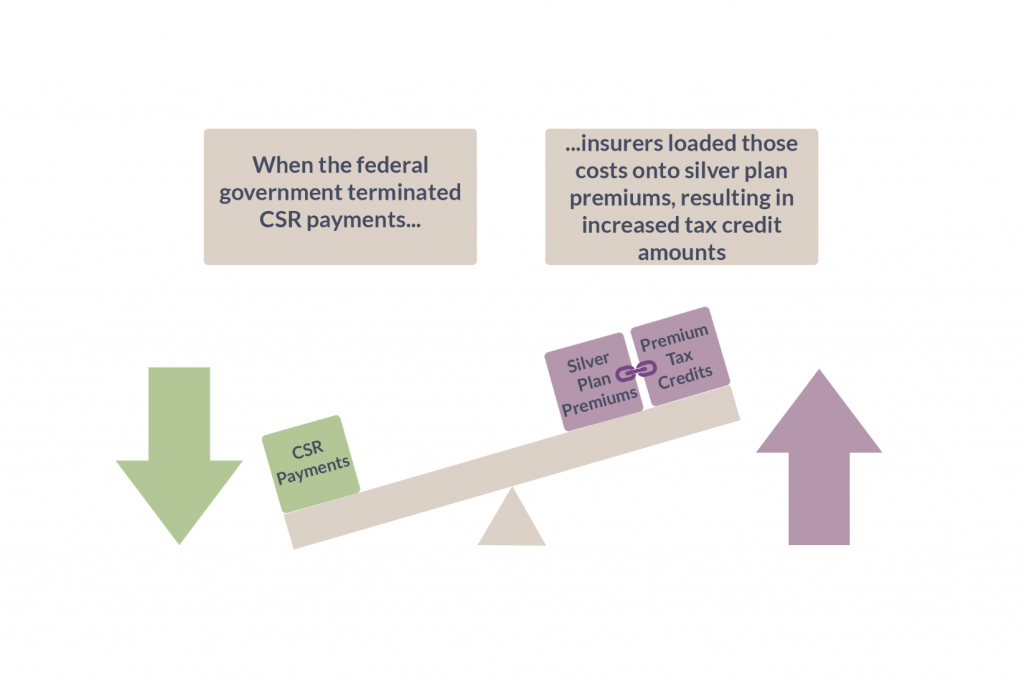 Tax credits are calculated based on the cost of the local benchmark silver plan, but enrollees may apply their tax credits to any non-catastrophic plan offered on the Marketplace. While premiums for silver plans increased substantially from 2017 to 2018 to bear the load of lost CSR payments to insurers, premium increases for bronze and gold plans were lower from 2017 to 2018. Some consumers may choose to enroll in a bronze plan, which would have higher cost-sharing than silver plans but substantially lower premiums after tax credits have been applied.

As Figures 5 and 6 show, rate increases for renewing a 2017 LCS plan compared to selecting the new local LCS plan are greatest in the Metro Detroit area, Genesee County, and Schoolcraft County. The magnitude of these increases varies depending on the enrollee’s characteristics, but is greatest for older enrollees with lower incomes. While some enrollees may experience significant premium savings if they switch plans rather than stay in their 2017 plan, premium costs are one of many considerations when selecting a health plan. 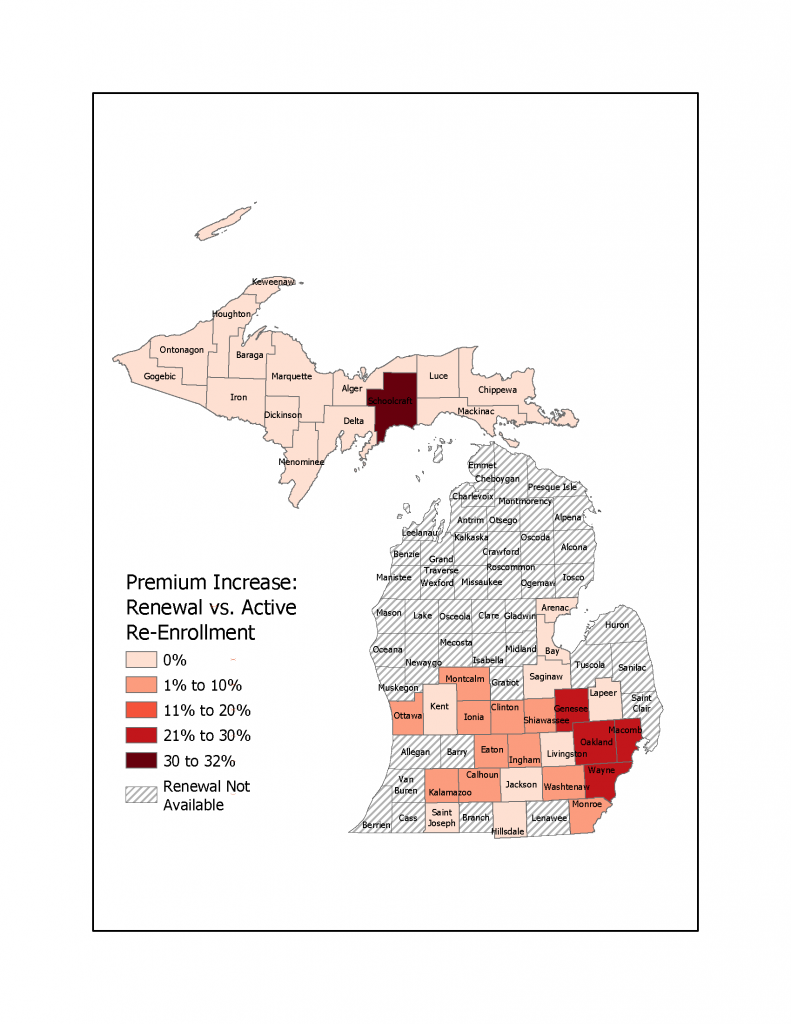 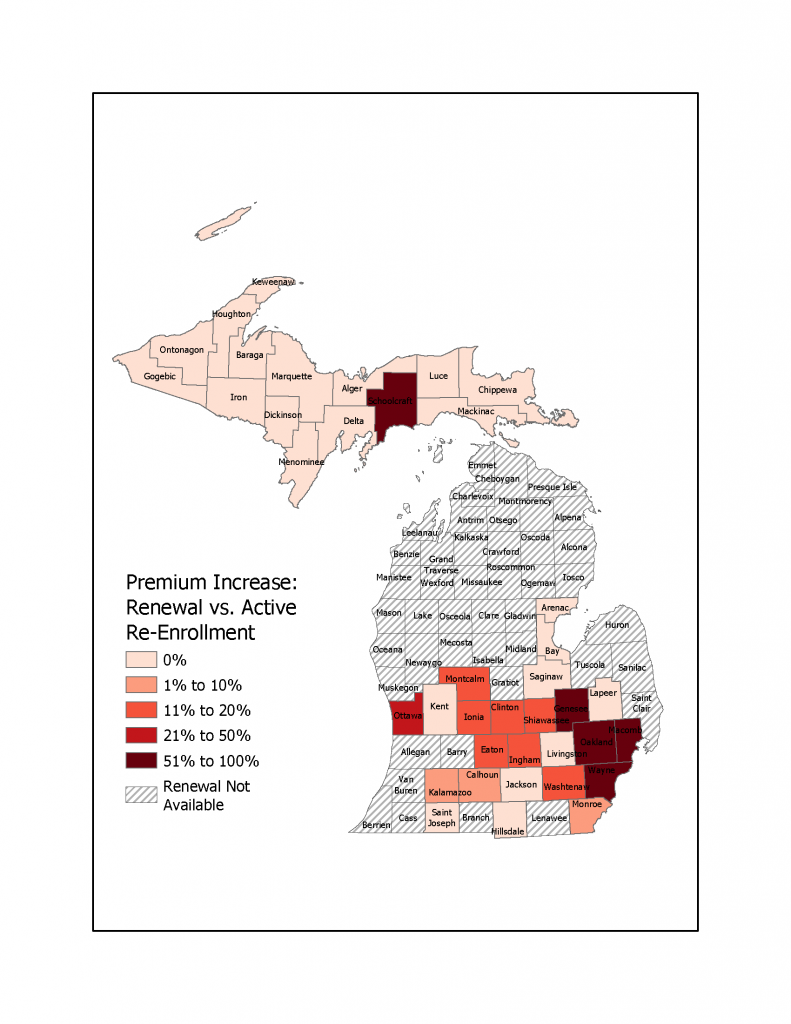 Michigan consumers continue to have a robust choice of carriers and plans on the Health Insurance Marketplace in 2018. While premiums for silver plans have increased substantially due to the termination of cost-sharing reduction payments, individuals who are eligible for premium tax credits are largely protected from these premium increases. With a 45-day open enrollment period that is half the length of previous periods, Michigan consumers will have less time than in previous years to select coverage on the Michigan Marketplace. This may impact the number of people who enroll in Marketplace coverage for 2018. 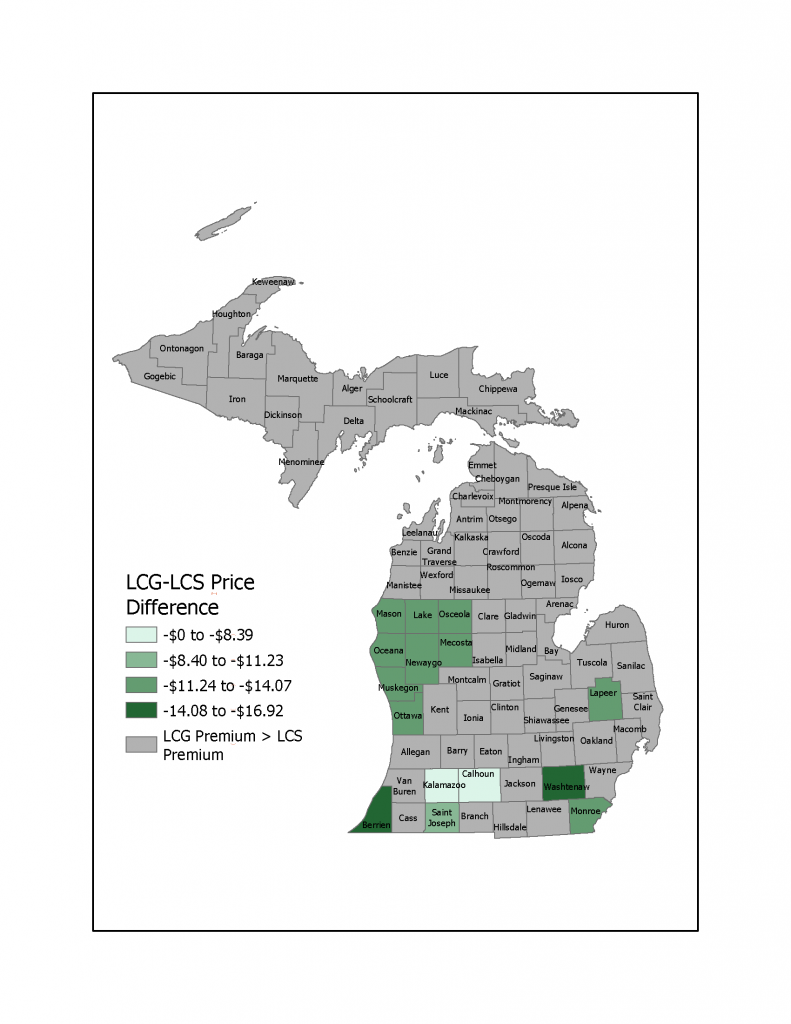 Center for Health
and Research
Transformation