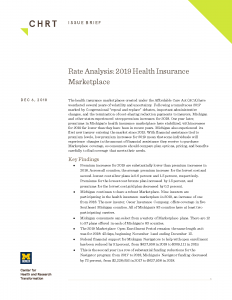 The health insurance marketplaces created under the Affordable Care Act (ACA) have weathered several years of volatility and uncertainty. Following a tumultuous 2017 marked by Congressional “repeal and replace” debates, important administrative changes, and the termination of cost-sharing reduction payments to insurers, Michigan and other states experienced steep premium increases for 2018. One year later, premiums in Michigan’s health insurance marketplace have stabilized, with increases for 2019 far lower than they have been in recent years. Michigan also experienced its first new insurer entering the market since 2015. With financial assistance tied to premium levels, low premium increases for 2019 mean that some individuals will experience changes in the amount of financial assistance they receive to purchase Marketplace coverage, so consumers should compare plan options, pricing, and benefits carefully to find coverage that meets their needs.

On November 1, 2018, Michigan’s health insurance marketplace launched the sixth annual open enrollment period which runs until December 15, 2018. During open enrollment, Michigan residents can shop for available health plans and check eligibility for financial assistance to decrease the cost of coverage for 2019. Compared to the last open enrollment period, the Michigan marketplace has seen an increase in the number of carriers offering plans, with one new carrier, Oscar Health, entering the market in five counties. In certain areas, there are also changes in premium costs and in the number and type of plans being offered, though in general these changes are not as dramatic as in previous years.

In 64 of 83 Michigan counties, the lowest cost bronze plan in 2018 was no longer the lowest cost bronze plan in 2019 as insurers adjusted their rates, the menu of plans they offered, and where they offered them. In 44 of 83 counties, the lowest cost silver plan also changed from 2018 to 2019 (Figure 1).(1) Plans are assigned metal levels of bronze, silver, gold, and platinum that have actuarial values of 60, 70, 80, and 90 percent, respectively. Plans at higher metal levels generally have higher premiums and lower cost-sharing., (2)All analyses were completed using 2018 and 2019 individual market medical plan data available at data.healthcare.gov. Notably, there are new benchmark plans (second-lowest cost silver plans) in 57 of 83 Michigan counties. Changes in benchmark plans are an important factor in calculating the amount of premium tax credits marketplace applicants may be eligible to receive. Applicants in counties where the local benchmark premium changed may see changes in their tax credit amounts, all other things equal. Not all counties experienced premium increases for the lowest cost and benchmark silver plans from 2018 to 2019

Figure 1: Counties with New Plans and with Premium Increases by Type of Plan, from 2018 to 2019

The changing dynamics of the health insurance marketplace are important for 2019 enrollees to understand. Under current federal policy, enrollees who do not actively apply and enroll in 2019 coverage are auto-renewed into their 2018 plan, if it continues to be offered. Auto-enrollment for the 2019 plan year

will occur on December 16, 2018. In addition, changes to benchmark plans directly affect premium tax credit amounts, so many enrollees will need to balance potentially higher costs for renewing their 2018 plan with other important considerations, such as the breadth of available provider networks.

Prior to the 2019 open enrollment period, Congress and federal agencies took several actions that may impact pricing and enrollment in Michigan’s Health Insurance Marketplace. While the magnitude of these impacts may not be felt for several years, they could potentially contribute to changes in Marketplace enrollment over time.

Repeal of the Individual Mandate Penalty

While the ultimate impact of the individual mandate penalty repeal is yet to be seen, it is likely that some individuals will choose to forego health insurance coverage (or switch to less comprehensive, non-ACA compliant coverage) in the absence of a monetary penalty. If those who shift coverage are young and healthy, premiums may increase for individuals who remain in the ACA Marketplace. The Congressional Budget Office estimated that the number of uninsured individuals would increase by 3 million and individual market premiums would increase by 10 percent more in 2019 than they would have if the individual mandate penalty had not been repealed.(3)Federal Subsidies for Health Insurance Coverage for People Under Age 65: 2018 to 2028, Congressional Budget Office, May 2018: https://www.cbo.gov/system/files/115th-congress-2017-2018/reports/53826-healthinsurancecoverage.pdf (accessed 10/31/18).

The ACA created local Navigator programs to assist consumers in enrolling in Marketplace plans and Medicaid, and to provide outreach and education about Marketplace coverage options. The federal government provides funding to Navigators in states using the Healthcare.gov platform, including Michigan. For the 2016 and 2017 open enrollment periods, the Navigator program was funded at $60 million and $63 million, respectively. For the 2018 open enrollment period, federal Navigator funding was reduced to $36.8 million. For the 2019 open enrollment period, federal Navigator funding was further reduced to $10 million. According to the Kaiser Family Foundation, federal funding for Michigan Navigators has been reduced by more than 50%, from $627,958 for 2018 to $309,111 for 2019.(4)K. Pollitz, J. Tolbert, and M. Diaz, Data Note: Further Reductions in Navigator Funding for Federal Marketplace States, Kaiser Family Foundation, Sep 2018: https://www.kff.org/health-reform/issue-brief/data-note-further-reductions-in-navigator-funding-for-federal-marketplace-states/ (accessed 10/30/18).

In October 2018, just prior to the start of the 2019 open enrollment period, the U.S. Department of Health and Human Services and Department of the Treasury announced two regulatory changes that may change Marketplace dynamics in future years, and could have some impact on future rates. These changes include a proposed rule to expand availability of health reimbursement arrangements (HRAs), and new guidance to states seeking waivers of certain ACA rules under Section 1332 of the law.

The HRA proposed rule would allow employer-funded HRAs to be used to pay for premiums and other cost-sharing in individual market coverage, potentially causing an increase in individual market enrollment as more employers offer these types of arrangements to their employees. The rule will be finalized following a 60-day public comment period and will not take effect until plan year 2020.

The new Section 1332 waiver guidance has the potential to weaken consumer protections for individual market coverage. Under previous guidance, states could apply for permission to waive certain requirements of the ACA in order to implement alternative coverage systems, as long as that system advanced the overall goals of the ACA and complied with “guardrails” to ensure coverage is as comprehensive, affordable, and enrolls as many individuals as Marketplace coverage would be in the absence of the waiver. The new guidance relaxes those guardrails so that states could, among other options, provide coverage that is less comprehensive or less affordable than ACA coverage. The guidance takes effect immediately, but its impacts may not fully be understood until future state waivers are approved under the new guidance.

From November 1, 2018 until December 15, 2018, many consumers currently enrolled in coverage through Michigan’s health insurance marketplace can renew their 2018 plan to maintain uninterrupted coverage for 2019. On December 16, 2018, returning consumers who have not yet actively selected 2019 coverage will be auto-enrolled in their 2018 plan. Certain enrollees may face higher premium costs if they stay with their current plan, due to several factors that affect premiums and premium tax credit amounts, and will need to balance these premium increases with other considerations, such as determining the provider network that best suits them.

Shifts in marketplace plan offerings from one year to the next can lead to local benchmark plan changes, and certain plans may be discontinued and not available for renewal. This affects 2019 enrollees, since the premium tax credit amount that enrollees may receive is based on two key factors: the local benchmark premium cost and the enrollee’s household income.(7)The amount of the premium tax credit received by an enrollee is determined by subtracting the enrollee’s maximum premium contribution from the age-adjusted premium for the local benchmark plan in the enrollee’s region. The maximum premium contribution is a product of the enrollee’s household income and the “applicable percentage” of their income they must contribute, a sliding scale that ranges from 2.01 to 9.56 percent of income for those between 100 and 400 percent of the federal poverty level. The amount of the tax credit can be affected by the factors listed below:

These pricing patterns are a lasting effect of 2018’s “silver loading” practice. After the federal government terminated cost-sharing reduction payments to insurers, insurers “loaded” the cost of the cost-sharing reduction payments onto premiums for Marketplace silver plans, causing steep rate increases for these plans. As a result, some individuals – particularly those who were ineligible for financial assistance and who pay full market price for premiums – opted to purchase coverage offered outside the Health Insurance Marketplace (“off-Marketplace”). Off-Marketplace plans are ACA compliant, but sold outside of the healthcare.gov platform. As on-Marketplace silver plans experienced steep premium increases in 2018, individuals who pay full price for coverage could select a nearly identical, but less expensive, off-Marketplace silver plan. According to estimates from Mark Farrah Associates, as of March 2018, there were approximately 92,778 individuals enrolled in off-Marketplace plans (24 percent of the ACA-compliant individual market), and 293,940 individuals enrolled in on-Marketplace plans (76 percent of the market).(8)A Brief Analysis of the Individual Health Insurance Market, Mark Farrah Associates, Aug 2018: https://www.markfarrah.com/mfa-briefs/a-brief-analysis-of-the-individual-health-insurance-market/ (accessed 11/16/18).

Since local benchmark plans are changing in most Michigan counties for 2019, premium tax credit amounts may also change for many enrollees, even if their income and household size remain constant. Figures 4 and 5 provide examples of the effective premium rate increases (after tax credits are applied) enrollees may face if they renew their 2018 plan, instead of actively enrolling in a new plan. We model the effects for enrollees who selected their local lowest cost silver (LCS) plan in 2018. According to Avalere Health, LCS plans have been among the most popular plans in the federally-facilitated marketplace.(9)E. Carpenter, Avalere Analysis: Most Popular Exchange Plans Are Increasing Price, Avalere, Nov 2014: http://avalere.com/expertise/managed-care/insights/avalere-analysis-most-popular-exchange-plans-are-increasing-price (accessed 11/3/18). The local 2018 LCS plan was discontinued in two counties in Michigan for 2018, while the local 2018 LCS plan remains available for renewal in 81 counties. LCS plan discontinuations are much lower in 2019 compared to 2018, when the local 2017 LCS plan was discontinued in 44 counties.

As Figures 4 and 5 show, rate increases for renewing a 2018 LCS plan compared to selecting the new local LCS plan vary by county. The magnitude of these increases varies depending on the enrollee’s characteristics, but is greatest for older enrollees with lower incomes. While some enrollees may experience significant premium savings if they switch plans rather than stay in their 2018 plan, premium costs are just one of many considerations when selecting a health plan.

Michigan consumers continue to have a robust choice of carriers and plans on the Health Insurance Marketplace in 2019. Premiums increased modestly across the state in 2019, and consumers in some areas experienced premium decreases. Premiums and tax credit amounts change every year, so consumers should compare their options carefully, as cost-sharing and tax credit amounts varied substantially from 2018 to 2019. Michigan residents can enroll in 2019 Marketplace coverage until December 15, 2018.